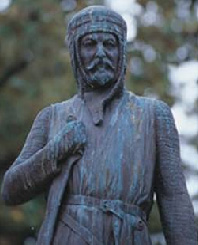 Jean Roesselmann’s father, who was born in Turckheim, was shoe repairer. This modest background did not prevent Jean Roesselmann to become the first hero of Colmar. Provost of Colmar in the mid 18th century, he was relieved from his duties in 1260 by the local nobility who supported the Bishop of Strasbourg. The Bishop coveted the city. Roesselmann had no other choice than to leave the city, but he came back the next year, hidden in a barrel, to liberate the city. He was helped by the future emperor: Rudolf of Habsburg.

In 1262 the Bishop Walter of Geroldseck tried a new incursion to seize the city. Roesselmann successfully defended the city and scarified his life. He was considered since that moment as the first hero of Colmar, who gave his life to defend the independance and the local liberties of Colmar.

In 1888, the municipality asked Auguste Bartholdi to do a statue of Roesselmann, in tribute to the hero of the city. Bartholdi chose to represent Roesselmann as Hercule de Peyerimhoff, mayor of Colmar from 1855 to 1877 and who was relieved from his duties because he refused to submit to the German authorities